Hey everyone
So this morning I couldn't sleep in, so I decided to stay in bed and finish reading a couple of things that I highly recommend. First I finished reading an interview with Tomie dePaolo on the SCBWI blog. It's a three part interview and its really inspiring and interesting. Hearing about his journey as a writer and illustrator was very exciting and insightful. It really left me wanting to draw and mostly gave me even more enlightenment on how to reach my latest challenge of finding my true writer's voice. It basically comes down to the obvious, write what you know, but I felt Tomie really enforces why this really is the only way to write honest and genuine stories. So if you have some time I highly recommend reading it! Here's the link:

Next I finished E.T.A. Hoffmann and Maurice Sendak's "Nutcracker." I'd never read the book before but it was such a wonderful story! I just really fell in love with this tale and the artwork- of course- was just scrumptious and magical. I love how much uniqueness went into adapting this story into pictures. Maurice Sendak was such a master of his craft and this book is just another reflection of his ability to turn a story into a visual journey of its own.

I will admit a huge reason I read Nutcracker this year is because my husband and I have the honor and privilege of getting to see the actual stage ballet in just a couple of days. We are SO excited not only to see the ballet, but also because since we live in Seattle, we have the lucky honor of seeing the actual production that Maurice Sendak himself was originally asked to create and produce- something I just found out from reading the book! So this classical masterpiece that I've seen only once as a child in person and then in parts from the movie version, is literally in my own backyard! I'm thrilled beyond belief that I get to attend this ballet that Maurice Sendak helped create and imagine!

It was such a sad day when I heard that he had passed away earlier this year. An artistic legend and inspiration like him influenced countless writers and illustrators over the years and it was a big blow when he died. Several years ago I was lucky enough to get an opportunity to apply for an illustration residency with him that he awarded to a handful of illustrators once a year- something only available to apply to by a remote amount of people. The opportunity came to my via my involvement with 826 Seattle, a tutoring center started by the writer Dave Eggars- which you know wrote the film adaptation of Where The Wild Things Are. I applied for the residency, but unfortunately was not one of the chosen. I wished so much to have gotten that chance, but I like to think that whatever the case, Mr. Sendak at least had looked at my work- which is amazing none the less. A hero of my actually saw work I created. Award or no-that's an honor in itself. I'd like to think that maybe if I were to have that chance now, that I might have had a better chance to earn the opportunity. From that loss, I gained an understanding that my work was not ready yet- that artistically I had a long way to go. But I feel like my hard work and learning has really paid off- that I am ready now. Really ready now.

In any case, I love you, Maurice, wherever you are. Onto the ballet, where I will be thinking of you!!! 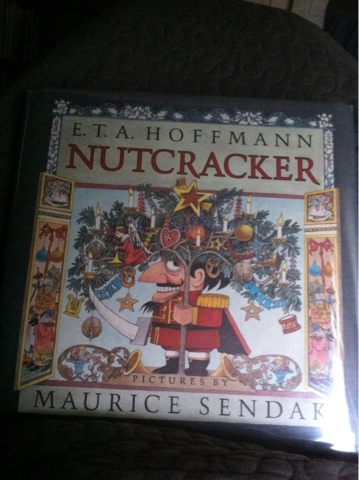 Posted by Jessixa Bagley at 9:39 AM No comments: 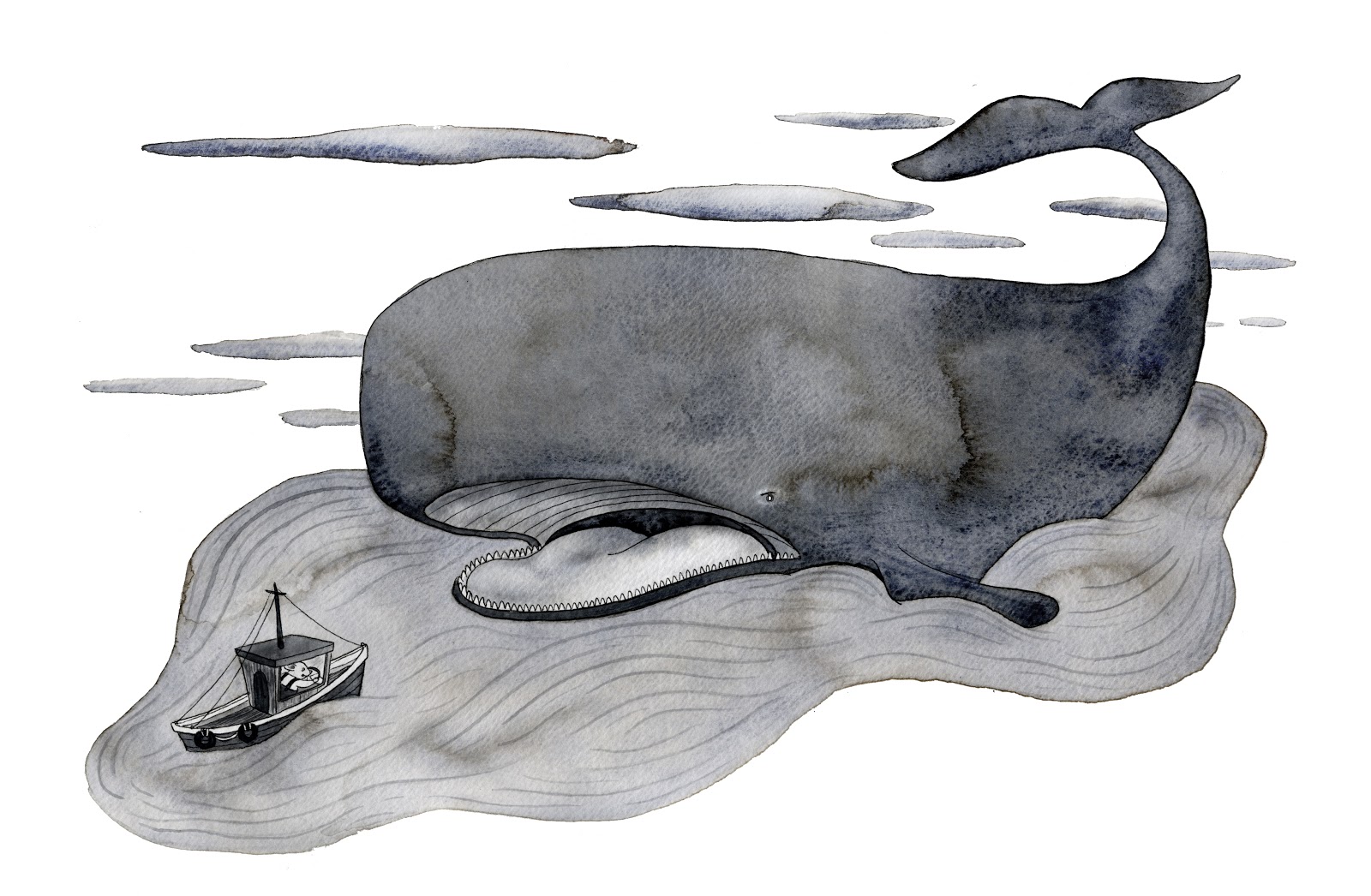 Hey all
For this week's theme, I'm furthering my exploration of black and white. This little guy is certainly about to explore this whale, hopefully the whale will be kind to his new visitor. He's gently going in but there is still something unsettling about his adventure and the atmosphere.

Thanks for looking!
Posted by Jessixa Bagley at 10:43 PM 3 comments:

Hey all,
Just wanted to share my finished piece for the Tomi dePaola Award competition. I really like how it turned out! It's always so interesting to paint things mono-chromatically, but really fun! The passage it's describing is below. Let me know if you have any thoughts! 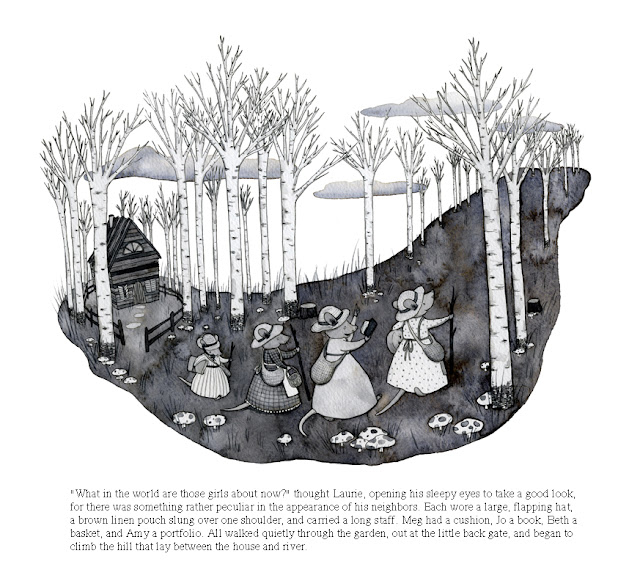 Hey all!
This has been a great weekend of fun with friends, hitting the Urban Craft Uprising, and now drawing! Yay!

So I'm taking another whack at the Tomie dePaola competition piece inspired by a different quote from Little Women. So here's the latest sketch! Painting to commence soon! 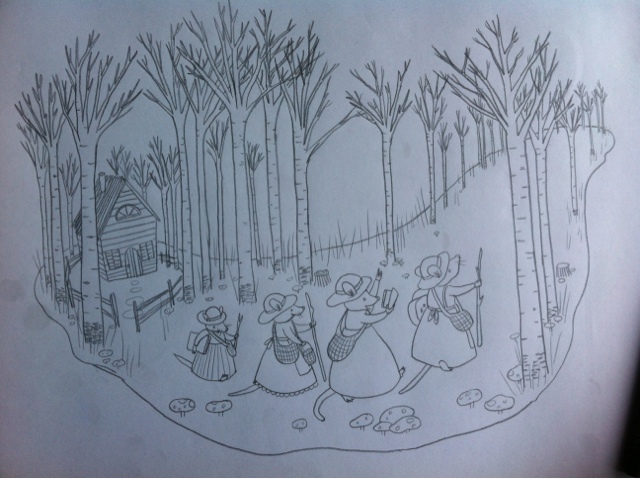 Posted by Jessixa Bagley at 11:51 AM No comments: