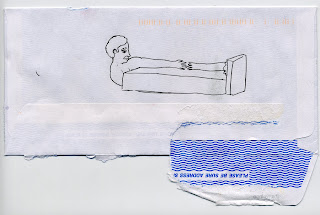 So I ride the bus all the time now and I see the craziest stuff. I see disgusting stuff, scary stuff, stinky stuff, etc. But one morning a few weeks ago I bumped into something so strange I had to record it. I got onto the bus carrying a box, so my view was a lit obstructed and the bus was really crowded so I was mostly concerned with just finding a seat- not who was on the bus. So I managed to nab a seat right up in the front and as I sat down I bumped into the guy next to me, as I turned to say I'm sorry, I looked at what was in his hands and it was a sculpture of this.

It was about a foot long and it was of a male doll reaching towards it's other arm attached to a some sort of cube. The doll looked like a black G.I. Joe that was taken apart.

He later got off at the stop for the Art Institute of Seattle.
Posted by Jessixa Bagley at 7:51 PM No comments: